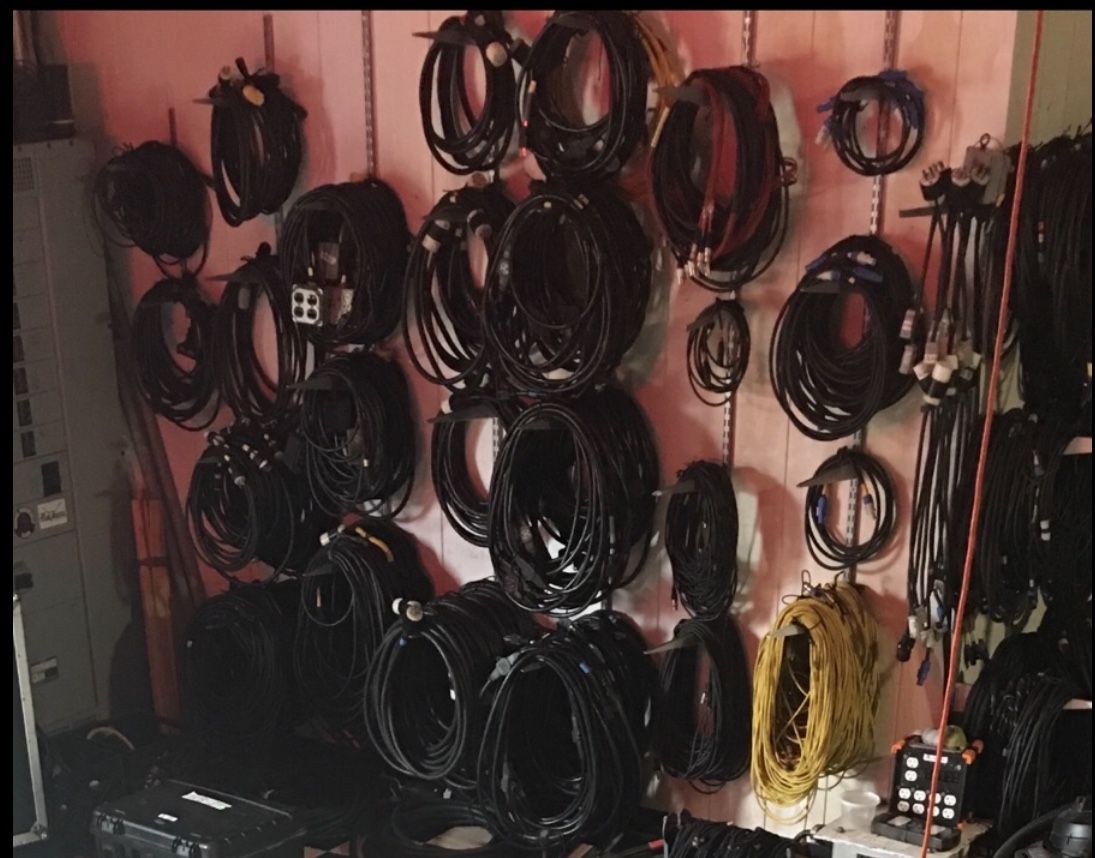 Over the last 11 years at Capital A Productions we have had the pleasure of working with some of the best artists in the world in all genres of music. Many of them Icons in their respective fields. Several of them have passed away in the last few years which makes working with them that much more special.

In this business we get asked often if we get a lot of autographs and photos from these shows. The answer to that question can be answered by simply looking at our WALL OF FAME. Here is where we would put all our autographs, photos and memories from years of doing shows. Just take a look for yourself….

Yeah, That is it…it doesn’t exist. It serves us much better as a cable wall. It’s not that most aren’t available for a quick autograph signing or a 5 second selfie. Most of them would oblige I’m sure. There is an unwritten rule in our industry that once an artist steps into the “backstage” area that they are in a safe zone. When they come in for load in and sound check they are just normal every day people showing up for work. It is not until the lights go out that they become the “Star” that they are. Sure, there is the occasional over needy diva out there, but for the most part these are real people who just happen to have an amazing talent. Before they were where they are now they were all struggling musicians clawing their way to the top. They all had families and bills and normal issues that everyone faces. To let you in on a little secret, even after fame and fortune they are STILL normal everyday people with families and bills and normal issues that we all face, that never changes. Sometimes this adds to the amount of responsibilities and stress that these people face on a daily basis, meeting deadlines and projections and goals to stay afloat in a tough, tough business. This safe zone lets them drop all the show biz façade and just be normal for a few hours a day. Would a quick photo for social media really hurt anything? Probably not…but we are there for event production not event attendance.

The ironic thing about this safe zone is that we usually end up having a real conversation with these people that seldom has anything to do with music. We get to have real, honest, funny, personal experiences that you don’t get from standing in an autograph line. Many times, these artists get bombarded with requests for photos and autographs, usually while trying to eat a meal or spend time with their families. Something they rarely get to do when always on tour entertaining.

I have a personal experience that happened to me years ago before working for Capital A that I will always remember. A well known country artist was scheduled to perform in the area. A few days before his scheduled show his teenage son was in a pretty bad car accident. This caused him to fly in later than the band and crew to spend more time with his son. My job that day was to drive the hour or so and pick him up from the airport and bring him to the show. The conversation that we had on that ride will always stay with me forever. Not once was he the country legend he is today. That trip he was just a concerned father and needed someone to talk to, even someone he did not know. This man flew in to fill his obligation to those that purchased tickets, putting aside his issues at home and fulfilling his commitments. On that day I was let inside his personal life and like to think I gave him some comfort with our conversation. That probably would not have taken place if I asked for a selfie as soon as he got into the car. None of that is to brag or say we get to encounter famous people all the time but to say that we get the privilege to be a part of so many peoples passion day in and day out.

At the end of the day they are just real people and enjoy being treated as so. So next time you get the chance for the 5 second photo or autograph request…maybe take a second to think of if bothering someone trying to have a normal day is worth it.